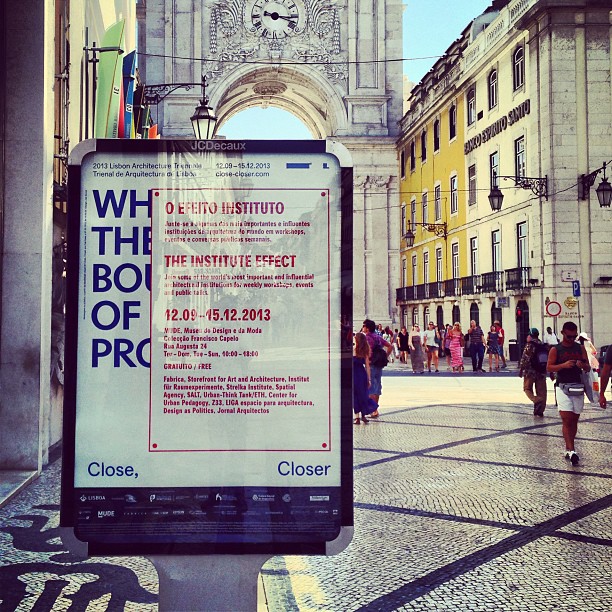 The large-scale posters and booklet covers didn’t have any image and were purely typographic. They presented short aphorisms in Portuguese and English: “The City is Yours”, “Less No!”, “Tactics not Systems”, among others. Below it was possible to read the Lisbon Architecture Triennale’s slogan and title: “Close, Closer.” No event, date nor location was announced. There was nothing that informed the audience. The content of the triennale was not announced but only its identity. Only a territory (in this case, Lisbon) and duration were marked. Usually, not much more would be needed – a triennale is not exactly the kind of event that catches its public by surprise (it is the third edition since 2007, having repeated itself in 2010 and now in 2013). The promotion of this kind of event does not necessarily aim to announce it but to set a tone and establish an identity for each one of its iterations.

Taking place in an environment of financial crisis and budget cuts, there was a noticeable expectation regarding this year’s triennale. Portuguese architecture was hit hard by recession, forcing established studios to lay off collaborators and close their doors. Commissions traditionally came from big clients – the biggest of them was the State – but austerity destroyed that ecosystem. As a result, the profession was re-examining its identity, institutions and practitioners, seeking to reposition itself within this new order.

In 2011 a new centre-right government was elected with the explicit promise that it would avoid cuts on jobs, salaries and pensions, focusing austerity on what they classified as the “State’s fat”. In the weeks that followed the elections all was forgotten, with the new government affirming that its austerity was going to be more rigorous than the goals imposed to the country by the troika (International Monetary Fund, European Central Bank and the European Commission). The result was an unseen rise of unemployment and a collective contraction of expectations by the majority of the Portuguese population. It was in this traumatic time that the triennale’s new chief curator, the British Beatrice Galilee, was appointed after an international contest. It was her who chose Zak Kyes to be the triennale’s designer. The planted posters all over the city were the first manifestation of Close Closer’s visual identity, after almost three years of work.

The sentences displayed in the posters were vague and well intentioned. If it wasn’t for the whiteness of the background or the absence of three or four smiling candidates, they could be mistaken for mayoral propaganda ahead of the elections that almost coincided with the opening of the event. When I read them for the first time I thought they were only examples of biennialese – a short and hopeful jargon, fine-tuned to be hostile to no one. I was almost wrong: in reality they were answers from the public to questions presented on the triennale’s website (“What answers should architecture be asking today?”, “When do we produce architecture?”, among others). Answers accumulated on the website as a background with some being selected by the curators to illustrate the event’s promotional material.

Yes, it is participative. Yes, it is the public’s voice. But cut short of the questions that motivated them they become oracular through the fast process of amputating part of its meaning. What is presented is an half-cut dialogue – a curious option for an event which was more directed at the public in general than to the “Portuguese architectural ‘tribes’”, as Galilee asserted in an interview during Close, Closer’s opening week. She added that in this triennale, exhibitions of maquettes were going to be deliberately avoided, as well as the cult of the discipline’s heroes.

It was a polemic statement. As an effect of the crisis it was already possible to observe an imprisonment of the profession’s discourse around its dominant identity and the successful architect who runs a studio and designs buildings of great visibility. In the press and specialised blogs the cases for the ‘right to build’ started to multiply. In reality, and even before the crisis, architecture was already not building at a very significant rate. The infinite internship was the norm, as well as the precarious employment, unemployment and emigration. A lot of architects used their training to invest in the transformation of old houses into hostels, bars and restaurants, managed and maintained by them. Others would move away from practicing architecture, opting for teaching, research, publishing or curating.

The large posters with its answers transformed into aphorisms by the choice of a curator appeared to show that this was not a triennale about architecture but about architecture curating. This was confirmed when one would visit the various events: a curated exhibition for which institutions were invited to curate curated events; just like the kind of meal that is commonly described as being curated. It also demonstrated an annoying tendency of contemporary curating: it does not speak, it does not have an opinion, but it seeks to provide conditions for the public to talk and to have its own opinion. However, as these truncated dialogues revealed, it’s very difficult to have an opinion about something that is left undefined. The posters ended up being rapidly replaced by new versions in which programs and detailed times would partially cover the sentences, reducing them to an almost abstract background pattern. What remained were fragments of opinion reduced to decoration.

—
Mário Moura is a design critic and lecturer based in Porto, Portugal. He teaches graphic design, design history and criticism at the University of Porto and writes on the blog The Ressabiator.