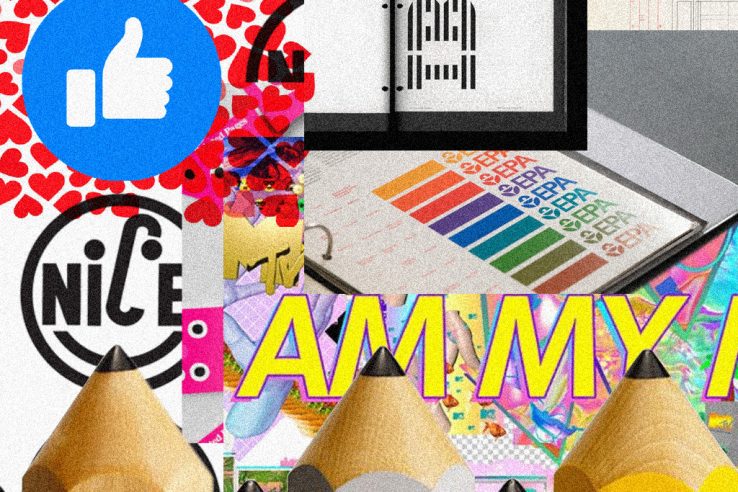 We republished the First Things First Manifesto numerous times with decreasing effect. We made post-it notes the symbol of design thinking, elevating it to a meaningless term used by businesses across sectors.

We made stretched typefaces cool, maximalism hot and anti-design mod again. We’re specialists in presenting variations of the past and selling them as novelty. So we fetishised vaporwave, repackaged it via MTV and turned it mainstream. We made trendlist happen and created an app to speed up the styling process. We spread Mr. Keedy’s Global Style… the beautiful miracle of replicating generic styles regardless of context to much applause across the design press. We insist on the existence of ‘neutral reporting’. Graphic design has been instrumental in the rise of capitalism and neoliberalism. The design press should be responsible for their selection criteria. They maintain the status quo. So this reminder comes as no surprise: all design magazines are political magazines.

We gave hundreds of pencils with different hierarchies, rubbed shoulders with every year’s ‘new blood’ and kept business as usual. We celebrate all things design with self-praise and nothing but good intentions: good design is (still and mainly) good business. And it’s this race for fame and awards, for young guns and the coolest designers under-30 that we happily feed. Entrenched competitiveness defines the culture of design, nurtured by supportive ❤❤ on every social media network. Design is now sold and marketed as a science of winning, with a variety of image filters, from ‘curated’ feeds of designers’ lifestyle, to schools that claim to give the necessary skills to be a graphic designer in 6 months, or world-renowned universities displaying their rank as badges of merit, year after year. Design education is now ranking warfare as business strategy.

Over the years, we lost interest in ebooks and embraced our love for print. So we successfully funded and reprinted dozens of classic 1960s corporate branding guidelines on kickstarter, feeding our nostalgia for modernism. We relentlessly publish multiple how-to and a guide-to books on a yearly basis. We, designers, adore to be sold instructions, brief stories, case-studies, curiosities, or even better, tips. They’re shorter. Annually, we welcome the Pantone Color of the Year™ — a prime example of the superficial advertising techniques the design industry employs. Popular design is colourful entertainment. We’re champions of anti-intellectualism: design is grids and parameters. And typography and calligraphy and occasionally, Shepard Fairey’s posters. Major bookshops are dominated by giant publishers, coffee table books and categorised reading for the generic designer. Writing is a waste of time and not what design is all about. Unless if it’s to praise one’s work; then it’s fine.

Since this wasn’t enough, we made RISO printing trendy. We made It’s Nice That the infectious authority in PR spin. We like to keep everyone happy and informed of what’s hip and flashy in less than 300 words. We helped people affected by natural disasters with minimalist posters. We founded dozens of design summer schools and sold expensive tourism as design education. Universities are slow in changing curricula to challenge current political and social contexts, largely functioning in bankrupt, exploitative models. They are subservient to the market. Global franchising of design schools and academies train students in trend-setting, peppered with quick design history and theory. But it’s fine, because we turned the designer as author into the designer as performer. We made the Twitter persona, the Vine addicts and the GIF gods. We invented the designer as brand and lecture each other on “how to put ourselves out there.” We’re masters of the “look & feel”, guardians of the “creative industry”, and more recently, the #creativesoldiers. And we share our data. Everywhere. All the time.

While we curate Instagram moments, stories and cute boomerang loops, xenophobic and fascist messages pour from Twitter to the streets and Ivanka is branded as universal female role model. The #Brexit General Elections are celebrated with leopard loafers and yearning for another season of Downton Abbey with a Nigel Farage cameo. Everything is information and counterinformation — purposefully staged contradiction. Yet, we designers, made some powerful pins to put on our jackets to reach our own cheerleading team. We made fun of Trump’s hair, hands, mouth, plane, tower and gold before he was even elected, without tickling the system. We’re using old weapons for new struggles, often overlooking the importance of collective action. We made DIY banners look stronger, more urgent and effective than anything we do or have traditionally done. We made satiric design powerless and subvertising pointless.

—
Article originally published in Modes of Criticism 3 – Design and Democracy.