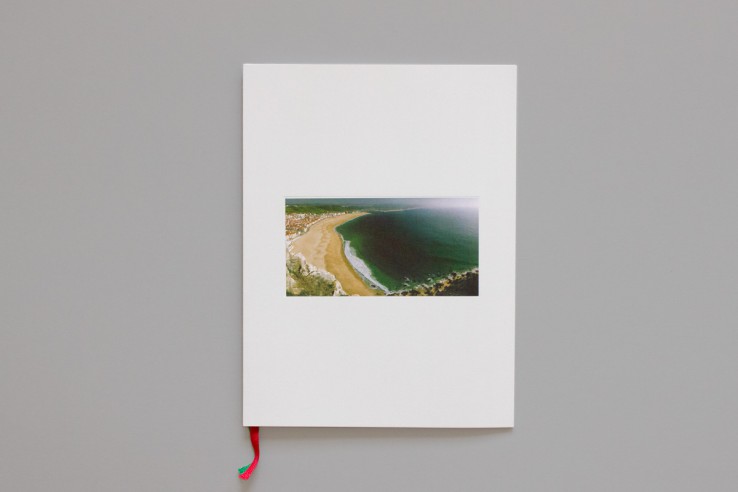 Margarida Correia is a Portuguese artist whose photographic work recurrently focuses on objects of affection, issues of belonging and the exploration of the relationship between the people who originally owned the objects and those who inherited them. Although with significant differences, the project New World Parkville was no exception.

In 2009, Correia was commissioned by Real Art Ways, an arts institution from Hartford, Connecticut (US) to develop a project with the local community. Her work consisted of a laborious investigation and documentation of the traditions and legacy of Hartford’s Portuguese emigrant community. From retired Fado singers to radio presenters, Correia’s work aimed to gather information about their (now mystic) ideas of the country they left many decades ago. The project — now at an extended stage — was going to be exhibited at the Museum of Electricity, Lisbon (Portugal), presenting those found objects and lost stories in the Hartford area, in order to reveal and recover symbols, rituals and history.

New World Parkville undoubtedly has fundamental elements that would allow a designer to produce a critical book, such as historical references, sociological research, iconography and a myriad of cultural manifestations in various forms. Furthermore, Correia’s work permanently navigates between subtlety, mysticism and subversiveness, which encourages a critical discourse between the artist, the context of the exhibition and the designer during the research and production of the publication. The kind of reflective explorations this art publication set out to pursue naturally has an important heritage.

In “The Portable Art Space” (Eye Magazine 22, 1996), designer and educator Anne Burdick noted the limitations, but also the possibilities and potential of the art catalogue. She highlighted that the catalogue “exists in the service of art and artist” and that “it is primarily an institutional document that is equal parts commemoration, evidence and archive,” while evidencing the dense network of agents involved in the production of the art catalogue. (Burdick, 1996, p. 28) Burdick, however, revealed the many situations in which it was possible to counter the traditional (delusional) “white cube” catalogue, by making it a “site-specific interpretation.”[sc:sidenote side=”right” ]1“The catalogue is a visual register in which pictures show what art looks like – as though that is ever any one thing – and in the uniquely Western way, we conflate seeing with possessing and possessing with knowing.” (Burdick, 1996, p. 32) The essay also serves as an important reminder of the rich history of institutional and contextual critique through book design that preceded the art and design self-publishing boom of the 2000s and the renewed interest in the book form, publication practice and the book as an exhibition space.

Following this tradition, criticism could play a vital role whilst designing the book: identifying and mapping the factual, creating room for historical connections and generating (maximising) space for positive disruption of the reading experience. The specificities of both the constructed photos and the ones collected by Correia, collapsed almost any distinction between what was considered to be fine art and what was a reproduction of an original document, now too, elevated to the status of the former. In this thin line that separates both, there was space to allow the documents to return to its original state.

After writing a short text about my preconceived ideas on the subject the artist was exploring, practical issues had to addressed, such as the quote for the production of the book. While the text was written with the goal of confronting my assumptions with informed research at a later stage of the design of the book – thereby promoting a slower production speed – the necessity to request a quote accelerates the design process, thereby creating an unavoidable friction. Writing slows down the often amnesiac, fast journey that speed imposes on the design process, forcing critical decisions to be more carefully considered due to the importance and weight of the written word.

The book aims then to transcend the mere documentation of the work exhibited, by being more than an extended caption and instead to work as an independent object capable of highlighting hidden narratives and opening doors for discussion and tension to emerge beyond its original context, the exhibition. A continuous negotiation recurrently present in this kind of design work was also naturally part of the design decisions: the book validates the quality of the work it carries, the artist and the institution paying for its production. This was also noted by Burdick.

The dimensions of the book have in mind the possibility of reproducing the majority of the documented objects in real scale, but most importantly, they seek to provide a relevant platform for the diverse works to establish connections with each other. A reference to an approximate size of the many scrapbooks documented by Correia was also considered. It is then important to say that emphasis was put on the context of the work and not as much on its formal and physical qualities. 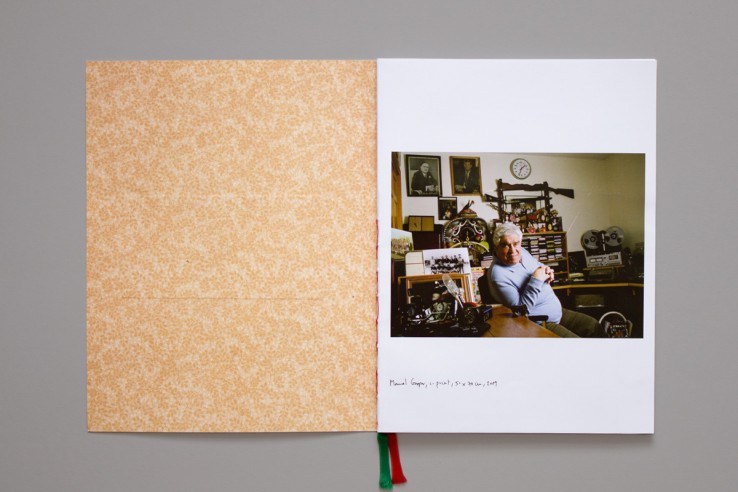 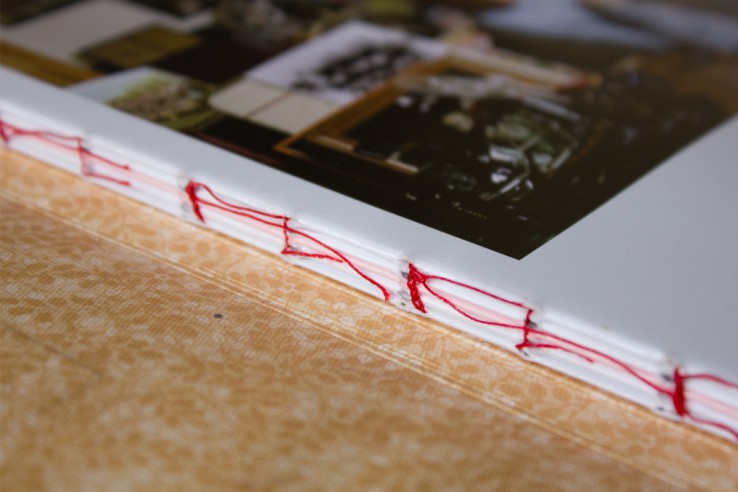 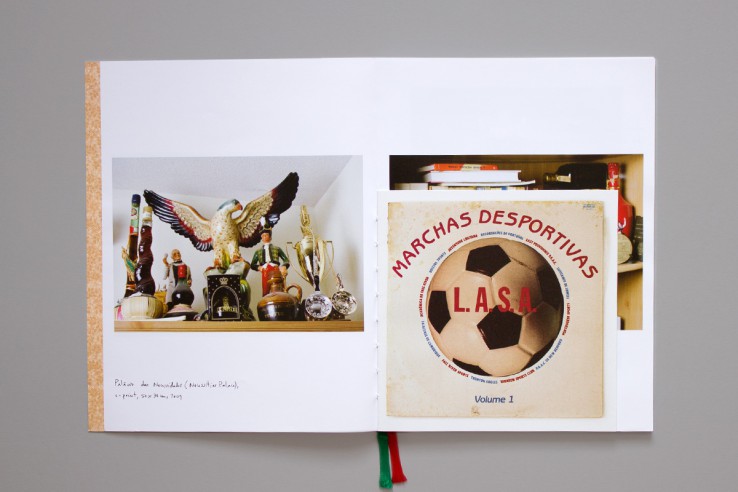 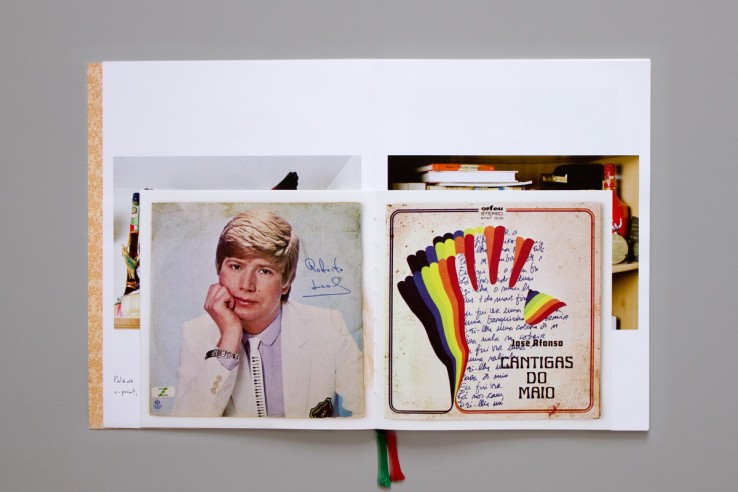 The editing of the vinyl records and the sequence in which they are displayed, allowed to purposely design a political and confrontational narrative. 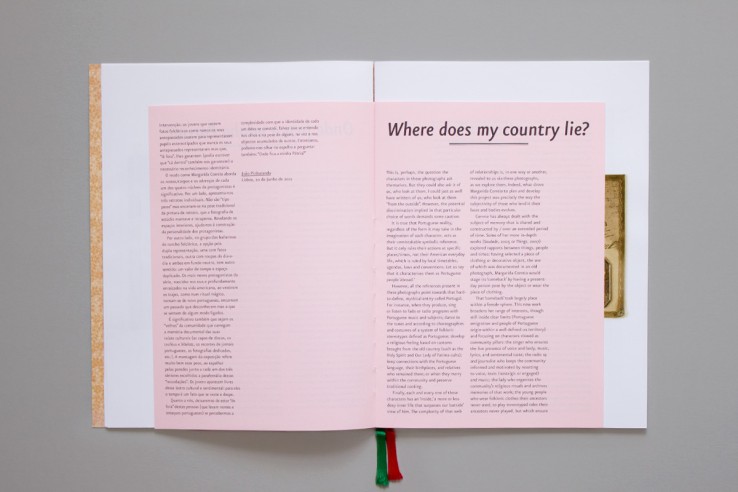 By editing all the work, including an article by Sociologist Glória de Sá and the artist, the knowledge about several entry points for critical statements through design decisions, naturally increased. This informed the awareness that the book should expand – and indeed question – the experience that the audience would have in the exhibition space, thus obliging the publication to part away from that particular setting.
Sequence, binding and the hand-drawn captions were determined by the artist’s research process, as a critical archive that could be read starting in different sections, with surprises attempting to disrupt the possibility of a continuous linear narrative.

The captions were hand-written by the artist, reflecting the original form in which the pictures were documented.

Looking back, other approaches could have possibly yielded more relevant results.[sc:sidenote side=”right” ]2Many versions of a Portuguese-American flag were made for the interior of the book, speculating on the identity of the emigrants who went to the US and the new generations already born there. 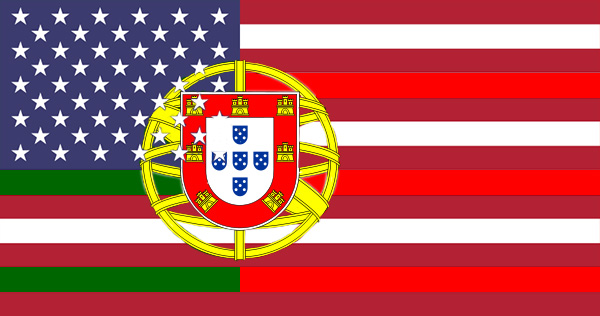 As an example, the reproduction of a 1960s pattern used in the interior of the book surely contrasts with the contemporaneity and ambiguity of the cover. It references the interior of one of the many scrapbooks Margarida Correia photographed – which are present in the book itself – forcing an historical time travel for the reader. However, a bolder decision such as the introduction of US imagery (e.g. the stars of the flag versus the Portuguese visual heritage signaled by its flag) would provoke and suggest a bigger absorption of cultures, amplifying a kind of nostalgic displacement felt in many photographs.

Although this project allowed a ‘critical’ approach to take place, it also denoted that the levels of ‘criticality’ are dependent of a series of factors, highlighted here and by Burdick in the aforementioned article. The extent to which an art catalogue allows to embed critique in its process and outcome, naturally varies from client to client, from artist to artist and the quantity and quality of the network of agents involved in its production. It is therefore a more constrained platform for reflection due to the compromises that have to be done, if compared with self-initiated, research-oriented work. However, with the mindset advocated by Burdick, it is always possible – and necessary – to find those critical opportunities.